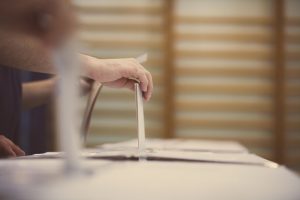 Voting hasn’t always been a high-tech affair. While many of us still use a pen and paper to cast our votes, we also use voting machines to scan and count our ballots. Before the age of voting machines, however, things were very different.

The first uniform, official ballots were used in Australia in 1856. These ballots were printed in an official capacity by the government, and then counted by hand. By 1888, Massachusetts adopted this model using the so called “secret ballot” where voter’s ballots were kept anonymous.

The first mechanical lever voting machines made its debut in the election of 1892 in Lockport, New York. These machines assigned each candidate to a lever and votes were tallied by counting the number of times a lever was selected for each candidate. This method of voting took the country by storm, and by the 1960s they were in use by more than half the nation. The lever machines were used in presidential elections through 1996, after which they were replaced by computerized devices.

How we vote today

Nowadays, most people who vote in a state or countrywide election are familiar with vote scanners. Constituents vote by marking a piece of paper with a pen next to the name of their candidate. Then, the voter feeds the piece of paper through a machine, which scans it to determine who the vote is cast for. This system first appeared in Kern City, California in 1962, but it was only popularized in the past two decades.