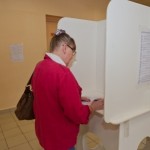 Countless jokes were written and vocalized on late night television after the 2000 presidential election results were announced. Many comments dealt with “hanging chads.” So, what exactly went wrong with the Bush versus Gore election of 2000?   In Florida, the ballots needed to be recounted due to unclear results. Ultimately, the recount showed that… Read more »

Voting has evolved in many ways throughout American History. From the very first colonists at Jamestown, to women’s voting rights, the election system has changed quite a bit! The First Vote: One of the very first actions taken by colonists in their New World was to institute leaders by way of elections. After escaping… Read more »