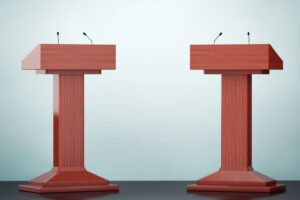 If you think back on all of the debates you have had with people, which ones were you most successful? In order to persuade people (voters) to take your side, there are several avenues for success. But if you play your cards right, you will be able to win some votes and create a chain reaction of success.

Voters need to be open to change

Frankly put, it is impossible to change the mind of a voter that is not open to hearing another side of the argument. As such, you must start small. Identify something that you both share a belief in and go from there. If they perceive you as on their side, they’ll be more open to hearing more. If you come at the argument from a completely opposite point of view, they will shoot you down.

Sacrifice some points of your argument

Consider the time and the context

Another very important thing to pay attention to is timing and context. Don’t try to persuade people in the wrong place or the wrong time. You’ll want to catch people when they are open to hearing your thoughts.

Give sincere compliments and positive feedback when discussing with others. Remember to hear and value their opinions, even while stating that you disagree. Instead of completely disagreeing with them, be willing to compliment them on their creative thought process.

Show what you can offer

Remember that people are always wondering what the reciprocity will be. In this case, they’re wondering what their vote will get them from you. Be sure to flaunt exactly what it is you’re offering, and find the people who want it. When they see the benefit first, it will be much easier to capture their attention.

At Honest Ballot, our electronic voting machines provide a reliable and secure election process. To learn more, contact us today.