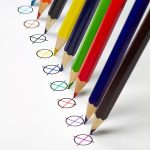 A general election was held in the Netherlands in early March, and the Dutch voters who showed up for it were faced with a big challenge when they arrived at the polls. There were so many political parties that took part in the election – a record 28 total, according to the Washington Post –… Read more »