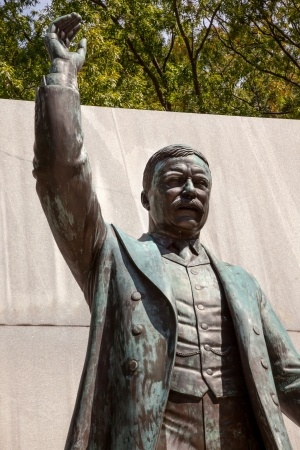 Mornings on Horseback: The Story of an Extraordinary Family, a Vanished Way of Life and the Unique Child Who Became Theodore Roosevelt

David McCullough’s biography is a unique and exceptional account of Theodore Roosevelt’s early years. Even if you have read previous accounts of his Presidency and success, Roosevelt’s rise to fame is equally as compelling. There is a wealth of information to be had for any reader. The book accurately documents Roosevelt’s childhood up through his pre-presidency. McCullough’s depth of research is noticeably and proven with the lengthy bibliography. This book is winner of the National Book Award.

Candice Millard’s The River of Doubt is a snippet from one of Roosevelt’s daring adventures after his loss in the 1912 election. I love this book because it reads like a fiction book, however it’s chock full of factual events and information. There is plenty of action and struggle. It provides a new sense of appreciation for one of the greatest Presidents.

Nathan Miller wrote this richly researched Roosevelt biography. This book, unlike the others on our list, starts at the beginning and goes all the way to his death. His complete life story is captivating for both young and old readers.

The Autobiography of Theodore Roosevelt

Also worth reading, is Roosevelt’s outstanding autobiography. As described in other biographies, Roosevelt had a passion for writing. Through his self-expression, he was able to capture details from his thrilling adventures. Some critics are quick to point out that he leaves certain topics out, however I think that his detail in this book is something that cannot be replicated by any other author.