The right to vote has a very long history. What once was a strict right of the white, landowning population, it has evolved to include every person, regardless of gender and race. Let’s take a look back few of the most memorable moments in the history of voting.

The ratification of 15th Amendment to the United States Constitution occurred nearly 146 years ago – February 1870 – and expanded the right to vote to all, regardless of race, color or previous condition or servitude.

After the 15th Amendment, voting restrictions again became prevalent during the Reconstruction era, with a series of laws that impeded eligible voters from casting ballots. These bills were all rendered moot, however, with the passage in Congress of the Voting Rights Act of 1965, banning those state laws. 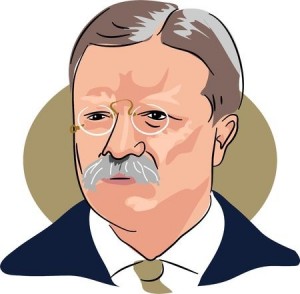 Along the way to the 21st century, there have been many bumps and bruises in the voting process. Many presidential terms have seen corruption where voting is concerned. From scandals to rallying against the rights of groups to vote, voting has had a constant struggle.

One president in particular dedicated much of his term to extinguishing the corruption and scandalous voting fraud. Theodore Roosevelt – one of the leaders who brought about the formation of the Honest Ballot Association – made voting reform one of the great passions of his lifetime.

President Teddy Roosevelt pushed to formulate new practices and laws, ensuring that all elections would be conducted fairly. Truthful and genuine elections under the law were at the forefront of the president’s plans, as Roosevelt lived by the creed that “reform is the antidote to revolution” and his Progressive Party was fearless when it came to election reform.

So what exactly did Teddy Roosevelt do to reform voting?

As a third-party candidate for the 1912 Presidential election, Theodore Roosevelt formed the Progressive Party, otherwise known as the “Bull Moose” Party due to Roosevelt’s declaration that he felt “as strong as a bull moose.” Roosevelt wanted to rally against competing presidential contenders who sought to advance the big business establishments that had taken over the Republican Party in the wake of the Civil War and the populist Democratic Party whose support came from corrupt, big-city bosses and the former Confederate states.

Part of Roosevelt’s and the Progressive Party’s plan was the philosophy of “New Nationalism,” which sought to open voting to everyone and provide more direct access to elections, including direct election of senators. Although the Roosevelt lost the election of 1912, many of his reforms succeeded in subsequent years, including expanding the right to vote to women and primary elections for state and federal offices, as well as many of the social programs outlined in his New Nationalism platform.

Roosevelt’s initial goals for fair and ethical elections are the same beliefs that we carry forward at the Honest Ballot Association today. Whether you need an independent review for your pending election or rental equipment to run you polling, we can help. To learn more, give us a call today at 800-541-1851.