A new congressional caucus zeroing in on voting rights formed last week, pledging to educate the public on the various voter suppression tactics since the Supreme Court struck down key provisions of the Voting Rights Act in its 2013 Shelby v. Holder decision. 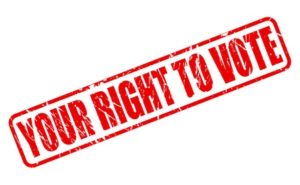 The group’s mission statement explains that they feel there is “overwhelming evidence that these laws disproportionately affect low-income populations and communities of color and the need to protect traditionally disenfranchised voters is overdue,” reports MSNBC.

In an email to MSNBC, Veasey wrote, “The Supreme Court 2013 ruling that gutted the 1965 Voting Rights Act set in motion what many feared: the subjection of minorities, seniors, and low-income Americans to unfair, punitive barriers preventing them from exercising their most basic right as American citizens.”

Seventeen states will have voting rights restrictions in effect for the first time in a presidential election since the passage of the Voting Rights Act in 1965, according to the Brennan Center for Justice. Voter ID laws in Veasey’s home state of Texas are “the clearest manifestation of modern day suppression tactics,” Veasey said at the caucus launch. “They must be done away with immediately so that everyone can have full access to the ballot box.”

Veasey is the lead plaintiff in a legal challenge to the state’s voter ID law, a case that went before a federal appeals court last week. Last month, the Supreme Court denied a request to block Texas from enforcing its voter ID law into the 2016 election cycle, according to The Dallas Morning News. The Fifth Circuit will decide whether the voter ID law stands ahead of the presidential election in November.

At the top of the newly minted group’s agenda is the expected introduction of a bill to block identification requirements that result in voters bearing an “associated cost,” such as acquiring a birth certificate or incurring travel costs.

The Honest Ballot Association is committed to conducting fair and secure elections. We take care of everything you need for your election, contest or lottery, from providing voting machines to counting ballots and delivering the results. We know the importance of maintaining a fair election that is also fast and easy to understand, and we work to deliver your results quickly with complete disclosure of all results, so there are no questions or uncertainties about the process. Whether your election or contest involves a broad institution or a small pool of voters, you can easily and decisively host and complete the process in a short time. A single day is all you will need to cast votes and we will deliver your results quickly once all the votes are finalized.

To learn more about our full range of balloting and voting services, including machines, software and certification through the Honest Ballot Association, call us today at 800-541-1851.