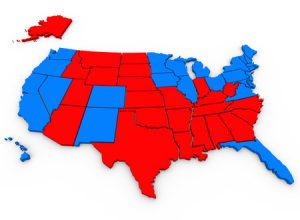 Every four years, voters from across the country gather at the polls to choose the next President. This makes it seem like the President is elected by popular vote, but in reality, they are actually chosen by the Electoral College. So, how do our votes help elect our next President? Here we answer many of the common questions Americans ask themselves about the Electoral College and the voting process.

How does the Electoral College work?

How are electors selected?

Electors are the people who cast the electoral votes that decide an election. In other words, the popular vote decides how the electors will vote, but actual people must be selected to make those votes. These electors are chosen by the political parties in their respective states.

Do electors have to vote for the person who won their state?

How many votes do you need to win?

A candidate must reach at least 270 electoral votes in order to win the election. If no candidate reaches that point, then the election is sent to the House of Representatives.

Can you lose the popular vote but win the Electoral College?

Yes. Since, electoral votes are based on the number of senators and representatives, it is possible to win the Electoral College but not the popular vote. This occurred in 2000 and 2016.

At Honest Ballot Association, we believe in guaranteeing fair, accurate and accountable elections, which is why we offer electronic voting systems and machines for rent that deliver on this promise. If you are interested in using our services, call us today at 800-541-1851!